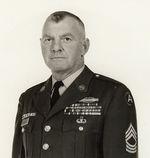 George Hubert Coldwell, age 82, of Murfreesboro passed away Sunday, May 27, 2007 at his home. Mr. Coldwell was a native of Victoria, British Columbia, became a US citizen January 21, 1955, and joined the US Army as a Canadian. While in the Army, he served as Master Sergeant, and received Silver Star, Bronze Star and Purple Heart in Korea, and Bronze Star in Vietnam. Once he retired from the Army, he worked at the Samsonite factory in Murfreesboro. He was also a member of the Masonic Lodge in Tucson, AZ. Mr. Coldwell was preceded in death by his parents, Fredrick and Julia Coldwell. Mr. Coldwell is survived by his wife, Nelda Coldwell of Murfreesboro; daughter, Brenda (Marc) Siegel of Franklin; sister, Gloria Williams of Victoria, Canada and brother, Fred Coldwell of California. Services will be at 10:00 am Saturday, June, 16, 2007 at Stones River National Battlefield with Military Honors. Dr. Mitch Johnson officiating. In lieu of flowers, the family request that memorials be made to the American Cancer Society PO Box 22718 Oklahoma City, OK.
To plant a tree in memory of George Coldwell, please visit Tribute Store
Services for George Coldwell
There are no events scheduled. You can still show your support by planting a tree in memory of George Coldwell.
Visit the Tribute Store
Plant a Tree
Print
Share A Memory
Plant a Tree