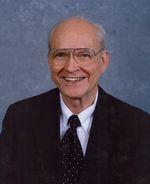 William "Bill" R. Cox, 76, of Murfreesboro, passed away December 31, 2007 at Centennial Medical Center. He was a member of the First Baptist Church in Murfreesboro. He is preceded in death by his parents, William B. and Martha Cox. He is survived by his wife, Janice Cox; his daughters, Linda (Charles) Thrasher of Redmond, WA and Donna (Pat) Williams of Nashville, TN; his brother, Robert (Barbara) Cox of Dallas, TX; his granddaughters, Brittany and Courtney Williams; and several nieces and nephews. Services will be on Thursday, January 3, 2008 at 2:00 pm in the chapel at Murfreesboro Funeral Home with Dr. Gene Cody officiating. Burial will follow at Evergreen Cemetery. Visitation will be on Wednesday, January 2, 2008 from 4:00 pm - 7:00 pm at Murfreesboro Funeral Home. Memorials can be made in memory of William "Bill" R. Cox to the First Baptist Church. Those wishing may send condolences online at www.murfreesborofuneralhome.com. Murfreesboro Funeral Home, 145 Innsbrooke Blvd, Murfreesboro, TN. 615-896-2229.
To plant a tree in memory of William Cox, please visit Tribute Store
Services for William Cox
There are no events scheduled. You can still show your support by planting a tree in memory of William Cox.
Visit the Tribute Store
Plant a Tree
Print
Share A Memory
Plant a Tree