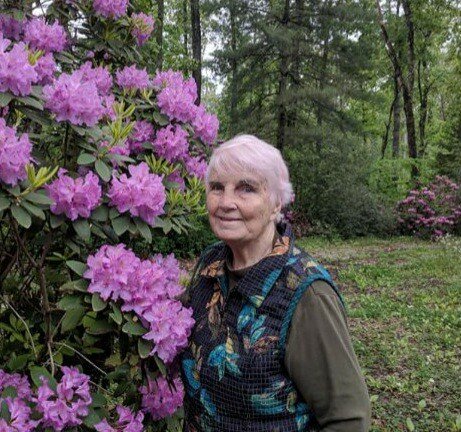 Please share a memory of Joyce to include in a keepsake book for family and friends.
View Tribute Book
Joyce Smart Dawbarn, age 91, of Rockvale, Tennessee passed away peacefully from natural causes on January 12, 2023. The Lord was merciful and welcomed her home swiftly after a few short days of hospice care—she was surrounded by family in the comfort of her own home. Joyce was born on November 26, 1931 to Harry and Maude (Kay) Smart in Warrington England. She had four siblings: Iris, Harry, Ernie, and Hazel. Joyce and her siblings grew up amidst the angst of World War II. The childhood memories of air-raids, gas masks, bomb shelters, and rations left a lasting impact on Joyce that was evidenced by the tenants she displayed throughout her life: dedication to family, prudent stewardship and generosity, gratitude, and her lifetime pursuit of the peaceable Kingdom here on earth. In her early life, Joyce graduated from Warrington High School for Girls and Secretarial College. She later took a position teaching shorthand and typing at a private girls’ school in Warrington. Joyce first met her husband Ronald Dawbarn in their hometown as children; they lived on the same street of row houses. During their youth at a neighborhood celebration of Guy Fox Day, Joyce saw Ron across the bonfire and told her friends she would marry that boy one day. Joyce left everything familiar to immigrate to the United States in order to pursue the love of her life—Ron had departed England a few years earlier to attend college in the states. Ron and Joyce married on July 8, 1955 in Independence Missouri and in 1959 Joyce became a natural US citizen. Once in the states, Joyce worked in the business office at Macy’s in Kansas City, MO, and later held a secretarial position at Allis Chalmers in Independence, Mo. Together, Ron and Joyce had four children, Linda Joyce Vandergriff, Rhonda Sue Shiffler, Heather Renee Dawbarn, and Albert Ronald Dawbarn. Once they began their family, Joyce took on the most important career of her life: becoming a homemaker. By the mid 60’s, the Dawbarns had settled in Manchester Tennessee where they built their dream home together. Joyce dedicated her life to the Community of Christ Church through service and congregational life in Missouri, Nashville, and Manchester Tennessee. Ron and Joyce, together with a few families, built a chapel on their property and planted the first CoC congregation in Manchester. Joyce was ordained to the office of priest and served as treasurer for the Manchester congregation. Joyce was passionate about youth ministry and worked summer youth camps at Foundry Hill Campgrounds and hosted retreats at her home. Joyce was the recipient of the Mama York Youth Worker Award for years of dedicated service to the youth. Joyce was devoted to her family, church, and community. She supported her children by serving as the PTA President, scout, and brownie leader during their elementary school years. She also supported her children in 4-H, cheerleading, and basketball. She was a passionate advocate of children’s literacy and always supported the Manchester public library; she made and donated book bags to the library for many years. With her soft British accent and her animated flair, Joyce made stories come alive for children and often lead story time at the local schools and library. She also volunteered to assist disabled children and their families and was very active in the Manchester FCE club. Over the years, she served as the club’s President and Chaplain. Her other joys included crafting of all kinds, ceramics, and poetry. Joyce’s granddaughters Holly, Sydney, Whitney, and Allison were her pride and joy. They each were beneficiaries of her enormous heart and humor. The addition of great-grandchildren filled her last years with hope and purpose. Niles, London, Victoria, and Annabelle’s photos and artwork were proudly displayed and admired. In her last few months, Joyce was filled with the new hope of anticipating the birth of her 5th great-grandchild, Jude, who is due in February. Joyce’s true legacy is her children, grandchildren, and great-grandchildren whom she devoted her life and prayers. Anyone who knew her could speak to the paradox of her tender lovingness and her sharp mischievous wit. She was a woman who could give you the most wisdom-filled encouragement and then have you laughing hysterically the next moment. She had a smile that you could practically feel the warmth from and a twinkle in her bright blue eyes that would keep you on your toes. She was beloved by many and will be greatly missed by all who knew her. Joyce was predeceased by her husband Ronald Dawbarn, her son Albert Dawbarn, her parents Harry and Maude (Kay) Smart, and her siblings Iris Broadhurst, Harry Smart, Ernie Smart, and Hazel Slinn. Joyce is survived by her daughters, Dr. Linda Vandergriff (pd Glenn), Rhonda Shiffler (pd Todd), and Heather Dawbarn (Terry), grandchildren Holly Kirk (Alex), Leslie Webb (Dewayne), Sydney Hutson (Lucas), Whitney Burford (Walker), Allison Tewell (Tony), Haley, Emma, and great-grandchildren, Niles, London, Victoria, and Annabelle. Joyce was expecting her 5th great-grandchild, Jude, this February. Joyce is also survived by her sister-in-law Ruth Stonham and brother-in-law John Dawbarn (Sandy) and many beloved nieces and nephews. A memorial will be held at Murfreesboro Funeral Home on January 28th at 4:00 pm. In lieu of flowers, the family requests donations of children’s literature to your local library.
To send flowers to the family or plant a tree in memory of Joyce Dawbarn, please visit Tribute Store
Saturday
28
January

Look inside to read what others have shared
Family and friends are coming together online to create a special keepsake. Every memory left on the online obituary will be automatically included in this book.
View Tribute Book
Share Your Memory of
Joyce
Upload Your Memory View All Memories
Be the first to upload a memory!
Share A Memory
Send Flowers
Plant a Tree