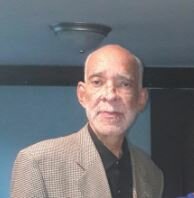 Please share a memory of Julius to include in a keepsake book for family and friends.
View Tribute Book
Julius Henry Harrison Junior was born on 22nd December 1950 in Detroit Michigan to the union of Julius Senior and Vera Harrison. Julius was the oldest of 3 children born to this union. He grew up in the Highland Park school system. He enjoyed playing sports and was on the high school football team. During his high school years, he was also active in sponsoring various social events in the Detroit area. After he graduated high school, he attended Oakland Community College where he was working on an associate degree in art and started his own production company where he wrote and produced a motion picture. He worked multiple jobs during that time to put himself through college. After graduating with an associate degree, he went on to further his education at Wayne State University where he obtained a Bachelor of Art degree. He met Chiquita Spooner in high school and later reunited and got married on July 14th, 1978. He inherited a daughter Shavon, and later had a son Julius Marcus Harrison. They were married for 44 years. He was a loyal and devoted husband to Chiquita and appreciated the care and devotion she provided him with over the many years of marriage especially through his illness. He worked at All State Insurance company for over thirty years as a claims adjuster. He made many friends over the years and was highly respected. Julius loved to travel with the family but his favorite place to visit was his family home in Georgia where many happy memories were made at family reunions, and the annual trip to Florida. Julius and Chiquita enjoyed entertaining family and friends in their home and were famous for hosting their super bowl parties. Julius loved boating, fishing, and watching all sports, but his passion was the Olympic games where he attended various Olympic events over the years. Even on one occasion while sick in the hospital and against doctors’ orders he was making reservations to attend the Brazil Olympics! His hobbies included playing golf and watching classic movies on TV. Growing up in Motown he absolutely loved music. (He was obsessed with the Temptations so much he called himself the 6th member!) Julius had an eye for art and loved taking family photos. He was also known for his culinary skills and was famous for his stuffed mushrooms and seafood crepes. He particularly enjoyed getting together with family and cooking meals such as prime rib, BBQ, and Sunday roasts. Julius was known for his sharp wit and drove his wife crazy on occasions. Such as when he asked his name, he would often reply “Denzel Washington “ He was a devoted husband, father, grandfather, and great grandfather. He was very loyal and protective of his family and very proud of his children and grandchildren. He was very close to his brothers Glen and Michael and took very good care of both his mother Vera and his in laws Clarence and Evelyn Spooner who all proceeded him in death. Despite various illnesses he battled over the years he fought hard and showed true resilience and was a pillar of strength being a wonderful example for his children to never give up and keep fighting down to the end. On January 12th, 2023, Julius Harrison went to sleep in death. He was preceded in death by his parents Julius Senior, and Vera Harrison. He left behind to cherish his memory his wife Chiquita, daughter Shavon Thomas (Terrence) Julius Marcus Harrison (Lilian). Grand children: Kennedy Jones (Austin) Blaise Thomas (Skylar) Madison Thomas. Great grandchildren Alilliana, Aiden and Natalia. His brothers Lloyd Glen Harrison, James Michael Harrison and many nieces, nephews, and cousins. Julius will be truly missed and loved by all his family. We all have the hope of being reunited with him again as promised at John 5:28,29 in the bible. This certainly is a promise from God that we all earnestly look forward to in the future. He will call, and we will answer. Job 14:14,15 Memorial Service 1.00pm-3.00pm Friday January 20th, 2023 Murfreesboro Funeral Home 145 Innsbrooke Blvd Murfreesboro, TN 37128 Zoom link for service (1.30pm- 3.00pm) Meeting ID: 615 971 5584 Meeting Password: 1991
To send flowers to the family or plant a tree in memory of Julius Harrison, please visit Tribute Store
Friday
20
January