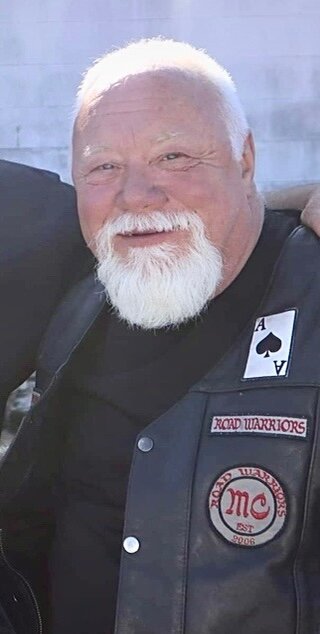 Please share a memory of Michael to include in a keepsake book for family and friends.
View Tribute Book
On Saturday, October 15, 2022, at 9:32 pm, in Daytona Beach, Florida (after enjoying Biketoberfest 2022) with his beloved daughter, Kasha, holding one hand, and his precious soulmate, Lisa, holding the other, Michael (“Mike”/ “Big Daddy”) Faine Lewis, age 63, took his last earthly breath, entered Heaven into the arms of Jesus and reunited with his dear family and friends already there. Even though our hearts are shattered and will never mend, we know that he hit those gold streets on two wheels and will be impatiently waiting for us to be with him, never to part again. (Oh, what a glorious, blessed day that will be!) Mike was born on August 15, 1959, in his hometown of Woodbury, Tennessee, where he graduated high school in 1977, all the time working somewhere, even at a grocery store. He went on to work at Alton Box at 18 years old, renamed to Smurfit-Stone Box Corporation, where he worked his way up the ladder to Shipping Supervisor and stayed there for thirty years, until the company closed. Mike had a drive to work and to succeed. During that time, he ran his own trucking company and insurance company as well. Not ready to retire, he revived Bojacks Market in Rockvale, Tennessee and was the current owner of Handlebars in Murfreesboro, Tennessee. He resided in Rockvale, Tennessee. Mike loved life and always stayed positive. He knew the Lord, with his whole heart, was baptized as a young boy in Woodbury and lived a life in service to others. If you knew Mike, you would never see him eat a meal without giving thanks to God. He would give you the shirt off his back and he always put others before himself. He would give to others when he did not have it to give. He loved having fun, spending time with his family and riding his motorcycles, especially a Harley Davidson. He was a tail gunner with RWMC (Road Warriors Motorcycle Club) and loved fixing up anything, especially if it was chrome and had a motor. Mike is preceded in death by his grandparents, who were more like parents to him, John and Louise Lewis and Walter C. and Amy “Big Mama” Hoover; his parents, John D. Lewis and Reba Hoover Lewis; the mother of his daughter, Sandra Lewis; special friends, Mike Provins, Jeff Schott, Shawn Burdick, and Cody Derrington (aka Old Skool). Survivors include, his only child, his daughter and best friend, Kasha Lewis Rittenberry and her husband, Jay Rittenberry, who Mike said,” was the best son in law he could have ever asked for”; his two granddaughters, Abigail Elizabeth and Sara Kate “Butterfly” Rittenberry, who were his world and he lovingly called them both his “Small Fry”; his precious soulmate, Lisa Toombs, who spoiled him rotten; beloved German Shepard, Kasha that protected him religiously; two loved sisters, Brenda Lewis and Barbara Kemper; special aunt that considered him her child, Donna Hoover; aunt, Faye Pearcy, special uncles, Bo Hoover and Doyle Lewis; special cousins, Randy, Mitzie, and DeeDee; his Road Warrior Motorcycle Club Family, his Burdick Family that accepted him as a small boy as one of their own and basically anyone’s life that he ever touched. When you hear the name “Mike Lewis”, ninety-nine-point nine percent of people will tell you what a good man he is and what an honor it is to know him. Visitation with the family will be held at Murfreesboro Funeral Home, on Sunday, October 23, 2022, from 2-8 PM. Funeral Services will be held, at the funeral home, on Monday, October 24, 2022, at 1 PM, with Pastor David Martin officiating and memories shared by his brothers of the RWMC. Interment to immediately follow at Fairview Cemetery in Norene, Tennessee. Pallbearers will be his brothers of RWMC. We know everyone knows how “Big Daddy” was (he never wore dress up clothes) so to honor his memory, we ask that you wear your MC Cuts, Harley Davidson Gear, or especially your RWMC, Bojacks, or Handlebars Gear. From the bottom of our hearts, we thank you for loving our “Big Daddy”. We do not know how to navigate this world without him, and your support is holding us up right now. If you loved Mike, we encourage you to follow in his footsteps and pay forward with kindness, trust in God with all your heart and always love others more than yourself.
To send flowers to the family or plant a tree in memory of Michael Lewis, please visit Tribute Store
Sunday
23
October

Look inside to read what others have shared
Family and friends are coming together online to create a special keepsake. Every memory left on the online obituary will be automatically included in this book.
View Tribute Book
Share Your Memory of
Michael
Upload Your Memory View All Memories
Be the first to upload a memory!
Share A Memory
Send Flowers
Plant a Tree