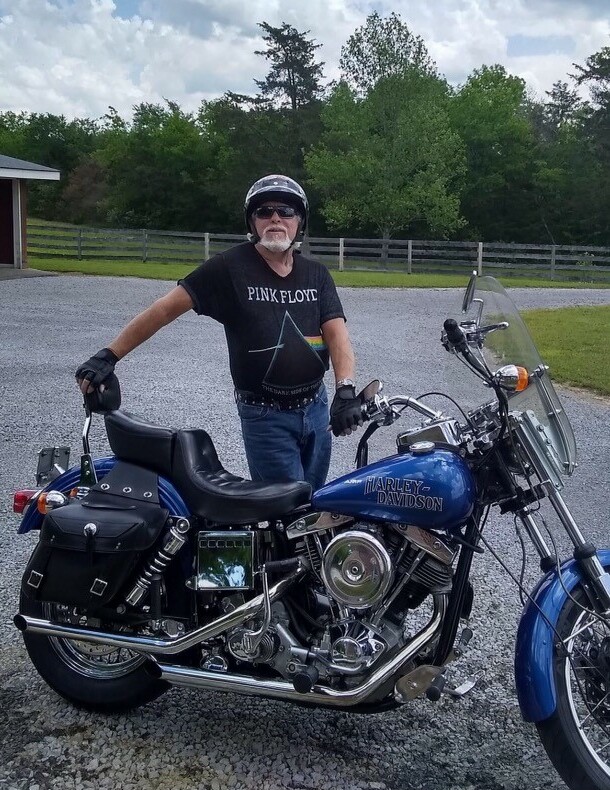 Donny Joe Lowe 68 years of age who resided in Bradyville TN was born on June 12th 1953, went home to the Lord on September 9th 2021. Donny was a wonderful man with a kind, gentle spirit. A friend to all who knew him. A great dad to 2 awesome kids. He loved life and lived every day to its fullest. He enjoyed riding his Harleys “Old Blue” and “Raven”. Spending time with family and girlfriend Bonita. Playing the drums with his brother in laws Billy Jr and Charlie and sister in law Samantha. Shooting pool. Listening to music. Being outside. And he was a heck of a dancer! He lit up a room when he entered it. Any time with Donny was time cherished. As a young man he raised Brown Swiss cattle and he was a member of the FFA. He loved all animals and they loved him. A legend. One of a kind. The very best. He will be missed dearly. Donny is survived by son Michael Lowe, Daughter Brandy Herman, Grandson Lane Herman, Mother Betty Jean Parker, Brother Mark Lowe, Sister Machelle Ferran, Nephews Nickolas and Christopher Ferran, and Jason Lowe. Brother in law Greg Ferran. Son in law Jonathan Herman, and girlfriend Bonita. Aunts, uncles, cousins, and many friends. He is proceeded in death by his Father Joe Ramsey Lowe, Brother Bobby Lowe, and Grandson Kobe Lowe. Grandparents, Great-grandparents, Aunts, Uncles, and his two beloved dogs Pippen and Touchdown. Donny’s visitation and service will be held at the Experience Community Church 521 Old Salem Road Murfreesboro TN 37129 on Friday September the 17th from 11:00-1:30.
To send flowers to the family or plant a tree in memory of Donny Lowe, please visit Tribute Store
Friday
17
September