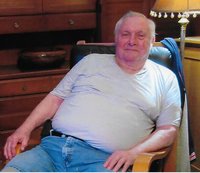 Thomas R. "Ray" Wolfe, age 84, passed away on April 19, 2021 at his home surrounded by family. Born August 5, 1936 in Appleton, Wiscon¬sin, he is survived by his wife Anita (Hilde) Wolfe, sister Alice Bentley of Waupaca Wisconsin, daughter Sue Poppell and husband Don, son Steven Wolfe and wife Lisa, (Murfreesboro), daughter Paula Hughett-Stevens and husband Joe of Robbins, TN, five grandkids, and eight great-grandkids. Thomas served his country in the United States Air Force, and received both a letter and an award from President Richard Nixon after making a recommendation for improving the Lockheed C-130 Hercules aircraft hydraulic cooling system. Retiring from the Air Force, he became a familiar face to the community as a United States Postal Service worker, where he worked for another 20 years. Thomas loved his country, and was skilled at a number of different tasks. He was passionate about baking and cooking. He was an avid fan of movies and television shows, watching a wide variety of programs from romantic comedies to action-adventure programming. One of Thomas’s favorite pastimes was crocheting blankets, scarves, and other items, which his friends and family members treasured. Thomas also loved his community, and made it a point to try to get to know his neighbors. His friends and family will remember him as a charitable man whose care for others transcends death, and his kindness is a reminder that we can all afford to be a little bit more neighborly. Thomas’s service will be Saturday, April 24 at Murfreesboro Funeral Home, with a visitation between 2p.m. - 4p.m., with a funeral service following at 4p.m.