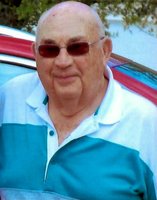 Robert John Balazs, 89 of Murfreesboro, TN went to be with the Lord Saturday, February 27, 2021. He was born in Bedford, OH to the late John and Edith Balazs. He was a Korean War Veteran and retired from Rotek in Aurora, OH. He was a lifelong car and motorcycle enthusiast. He is survived by his loving wife, Janice Balazs, son Michael Balazs (Belinda) and daughter Diane Colecchi both of Murfreesboro, TN. Grandchildren; Breanna Rea (Keith) of Murfreesboro, TN; Matthew Colecchi of Austin, TX; Joshua Balazs (Michelle) of Cuyahoga Falls, OH; Sarah Lauck (John) of Fort Wayne, IN and great grandchildren; Addison, Paityn and Parker. He is preceded in death by his sister Betty Balazs. A Memorial Service will be held in the chapel at Murfreesboro Funeral Home on Monday March 8, 2021 from 1 PM – 3 PM. Interment will be in Shalersville, OH at a later date. In lieu of flowers please make a donation in memory of Robert Balazs to Alive Hospice. https://www.alivehospice.org/donate