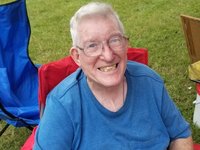 Irving Selmer Christianson, age 88 of Murfreesboro, TN went home to be with the Lord on Thursday, September 3, 2020. Irv Christianson was born on July 13, 1932 in Minnesota to the late Joseph Irving and Pearl Irene Miller Christianson. Irv served in the US Army. He married his wife of 68 years Betty on September 3, 1952. They spent the rest of his life on a wonderful adventure. Irv had a long career with the Railway Express Agency working his way up from loading trucks in Scottsbluff, Nebraska all the way up to territory manager before changing careers and becoming a salesman. He started this new career at Best Business Products in Sioux Falls, SD where he became one of the top salesmen in the nation. He then fulfilled one of his lifelong dreams by starting his own family business, Christianson Business Products, in 1980. He worked there until he retired in 1992. Christianson Business Products is celebrating 40 years in business this year. Irv lived life to the fullest. He loved his family. He believed in working hard and playing hard. He enjoyed traveling all around the country exploring new places, camping and visiting family & friends in his motorhome with Betty. Their homes have always had an American flag flying high with a shiny clean car in the driveway. He loved his life on earth, but in recent years he talked a lot about what heaven would be like. He doesn’t have to imagine anymore. Irv is survived by his loving wife of 68 years Betty Christianson, daughters; Jeanie (Steve) Wielgus, Sandra (Paul) Rayman, Sherry (Edward) Davila, sons; Jerry (Marcia) Christianson, Larry Christianson, 9 grandchildren, 23 great grandchildren, 1 great great grandchild, brother; Roger Christianson, sisters; MaryAnn Christianson, and Peggy Hine. He was preceded in death by his sisters; Charlotte Radomski, Karen Opp, Ramona Millar and Janice Jackson. Visitation with the family will be held at Murfreesboro Funeral Home on Wednesday, September 9, 2020 from 4pm – 6pm with service to follow at 6pm in the chapel. Interment will be held at Middle Tennessee Veterans Cemetery on Wednesday, September 16, 2020 at 11am with Pastor Mo Obayomi officiating. Murfreesboro Funeral Home and Cremation Services 615-896-2229.