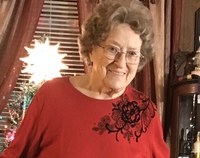 Joyce Armstrong, 85, left this world to go to her heavenly home on February 2, 2020. She died, as she had prayed, peacefully at home. She was preceded in death by parents; Richard and Hattie Robinson, brothers; Cecil, James, and Paul Robinson, sisters; May Jakes and Claytie Mahaffey, grandson; Michael Armstrong, and great grandson; Aiden Anderson. She is survived by her beloved children, Teresa, Larry, Mike and Mark – whom she said, “was her greatest accomplishment.” Three grandchildren and eleven great-grandchildren, sister; Evelyn Mahaffey. She retired for the first time from Paramount Packaging after 25 years. She returned to work for another 20 years at Stones River Manor, where she worked until almost 83. She enjoyed traveling all over the country with the senior groups. The past few years have been a struggle for such a strong independent woman to have to depend on others. She was a strong Christian who watched her “preaching” every evening and said, “I will go when God decided my time on earth is done and no one can save me.” She was a very private person whose wish was to have a graveside service. The service will be held Friday, February 7, 2020 at 11am at Coleman Cemetery. Murfreesboro Funeral Home is in charge of the arrangements.