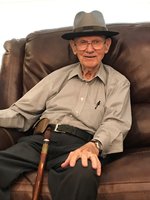 Mr. Adams was a retired trucker having driven primarily for Ryder/PIE trucklines. Prior to being a truck driver he was a farmer in Giles County. Mr. Adams was a member of Cason Lane church of Christ in Murfreesboro. Funeral services will be conducted 1 pm Thursday, November 14 at the Murfreesboro Funeral Home, 145 Innsbrooke Blvd. Visitation with the family will be from 10 am to 1 pm the day of the funeral. Interment will be at Mars Hill Cemetery in Marshall County.